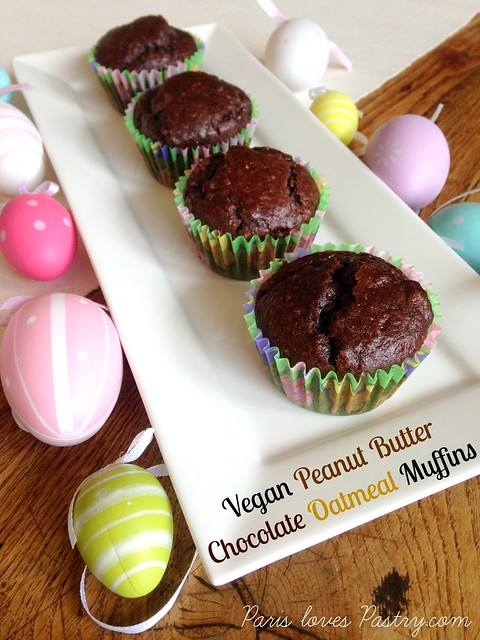 Another vegan recipe! I want to start an entire vegan section on this blog and bake vegan recipes more often, so here's another recipe after my vegan oatmeal raisin cookies. BTW, Alicia Silverstone, actress and author of the vegan cookbook 'The Kind Diet', favorited my tweet about her recipe. Pretty cool! Anywho, I made these vegan muffins because I was in the mood for a hearty muffin in the morning with oatmeal. I stumbled upon the recipe online, and the peanut butter seemed a good idea because it has a lot of protein. The chocolate seemed a bit much, but I was willing to give it a try!

It's quite a mouthful to even pronounce this recipe 'vegan - peanut butter - chocolate - oatmeal - muffins'. And quite frankly, that was the problem with them. They had too many ingredients, making them very heavy to eat and I felt sated after only eating 1 muffin (that's not normal for me, usually downing 3 in a go). So I'm still on the look out for a good vegan oatmeal muffin recipe. I think one with mashed bananas would be nice. Better luck next time! 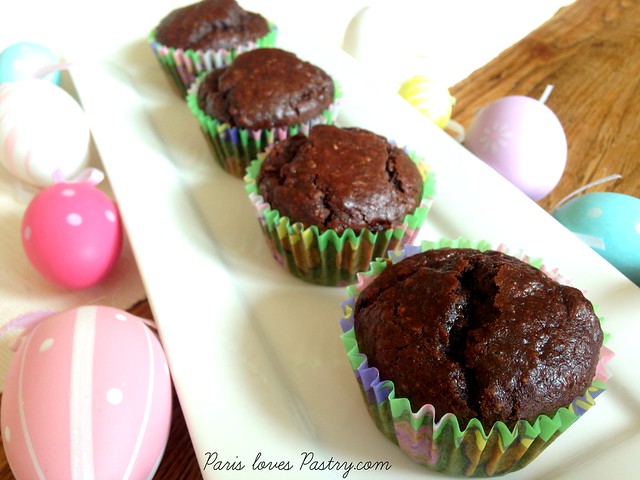 Instructions:
- Preheat the oven at 400F/200C for 15 minutes. Grease with little cooking spray or line the muffin tins with paper liners and set aside.
- In a large bowl combine together the flour, oatmeal, cocoa powder, sugar and baking powder.
- In a small sauce pan, over low heat, melt peanut butter in milk, stirring constantly. Remove from heat and set aside to cool slightly. Once the peanut butter mixture is cool, incorporate it into the dry ingredients and stir until just combined.
- Spoon the batter into the prepared pan filling it to the top of each cup. The above batter was enough for 9 muffins. So I filled the remaining 3 cups with water to ensure even baking of the muffins. I took out mine from the oven after 16 minutes, but I think 13-15 minutes should be perfect. I felt that in this recipe the smell of the muffins is an indicator of the doneness in addition to the toothpick test. I started smelling a burnt cocoa smell and that's when I removed the muffins. So the tops were a bit crusty and it had turned slightly back. Either have a close watch or reduce the oven temperature to 350F and bake it accordingly.