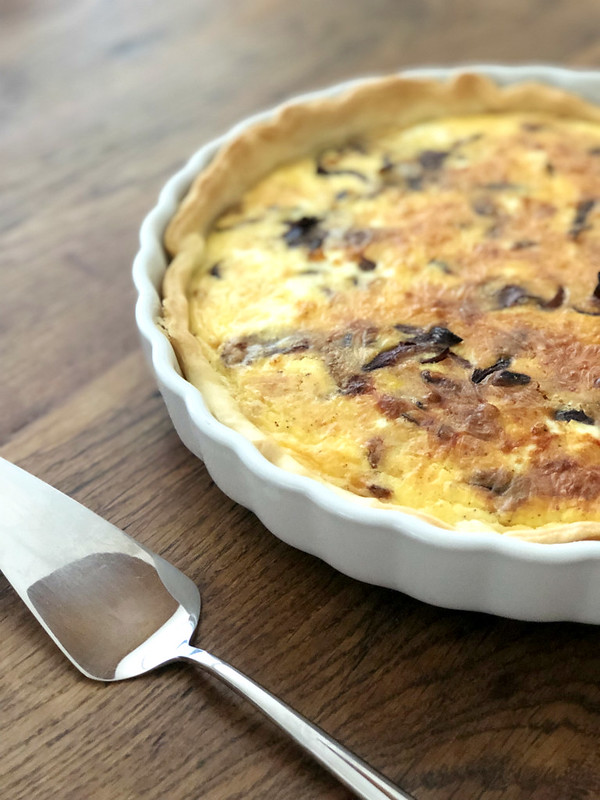 This might just be ... my first savory recipe I've ever put on the blog! But it is still a baking-recipe, and it's FRENCH! I quite often cook French food for dinner, but I never take pictures of it or post it on my blog because I hate the lighting in pics at dinner time. I baked this quiche in the afternoon for dinner, and it was still sunny so I thought, why not?


I made a Val-Dieu salad along with the quiche, which is a very popular salad in Limburg, The Netherlands where I live. Val-Dieu is a Belgian cheese. You roast the cheese and apples, use walnuts and onions, and make an apple vinaigrette for the salad.


I got the idea for an onion quiche after making a French onion soup the week before, which came out amazing! It was my first time making a soup from scratch - EVER! I even made the vegetable stock, which, in hindsight is the easiest thing ever to make, but it seemed daunting before. I'm not a huge soup-lover, except for pumpkin- and French onion soup. French onion soup and caramelized onion quiche would also make a great dinner pairing! 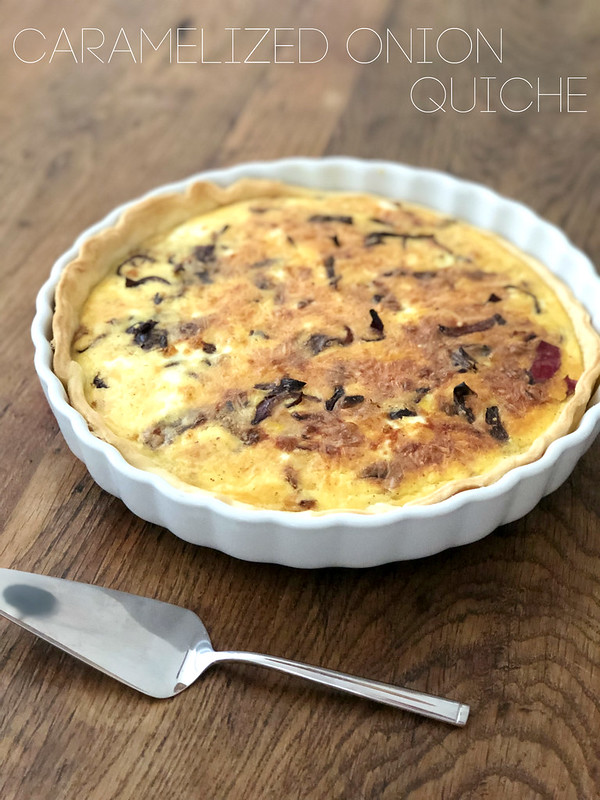 Instructions:
METHOD SLICING ONIONS STEM TO ROOT
- To caramelize onions, you'll want to slice them lengthwise, or from stem end to root end. That way the onions will hold their shape better during the long cooking involved in caramelizing. (See How to Slice an Onion for more details.)
- First, use a sharp knife, get a firm grip on the onion, and slice off the stem end of the onion, by about a 1/2 inch. Cut about 1/8th of an inch from the root end, cutting off the roots, but leaving the core intact. Then place the onion root side up on the board to stabilize it, and cut it in half, straight through the root end.
- Peel back the papery skin of the onions. If you want, to keep your cutting area clean, cut off the roots with the skins, but cut only enough to cut off the messy roots. Keep the root end intact. It will make it easier to slice the onion.
- With an onion half cut-side down on the board to stabilize it, make angled cuts into the onion, from stem end to root end, cutting to, but not through the root end. Work your way around the arc of the onion, aiming your knife's blade toward the center of the onion.
- Make a "V" cut in the root end of the onion to cut out the tough root end, to release the onion slices.

PRE-BAKE THE CRUST
- Make a frozen tart crust: If you are making your own crust (instead of using an already prepared frozen crust), roll out your dough on a lightly floured surface, into a 12-inch circle. Fit into a 9-by-1 1/2-inch round tart pan (or 9-inch pie dish), pressing dough into corners. Transfer to freezer to chill for 30 minutes.
- Line frozen crust with foil and pie weights: Preheat oven to 350°F. Line pastry with aluminum foil, pressing into the corners and edges, allowing extra foil on the sides (they'll be your handles when you remove the foil).
- Fill at least two-thirds with baking weights—dried beans, rice, copper pennies, or ceramic or metal pie weights.
- Bake with weights: Bake first for 15 minutes, remove from oven and let cool a few minutes. Carefully remove aluminum foil and weights.
- Remove weights and bake again: Poke the bottom of the pie pan with the tines of a fork and return to oven and bake an additional 10 minutes or until lightly golden. (Fork holes are for any air to escape.) Transfer to a wire rack to cool while making filling.

CARAMELIZING THE ONIONS AND PREPARING THE QUICHE
- The onions will take about an hour to cook on the stovetop before they are ready to go into the quiche. So timing-wise, if you are making the entire quiche from scratch, it makes sense to get started on the onions once you've put the crust into the freezer to chill before pre-baking.
- Caramelize the onions: Heat 2 Tbsp olive oil in a large, heavy-bottomed sauté pan on medium heat. Add the onions and sprinkle a little salt over them. Cook, stirring occasionally for 10 minutes, until the onions have softened and are translucent. Reduce the heat to medium low and cook for an additional 40 minutes, stirring occasionally, until the onions are well browned. (See How to Caramelize Onions for more details.)
- Add 2 teaspoons balsamic vinegar and cook for 10 minutes more, until onions are completely caramelized. Remove from heat.
- Assemble the quiche: Place tart pan on a baking sheet to catch any run-off there might be. Sprinkle half the cheese evenly over the bottom of the crust. Spread onions over the cheese and then top with remaining cheese.
- In a medium bowl, whisk together milk, cream, and eggs. Season with nutmeg, salt, and pepper. Pour over the tart.
- Bake the quiche: Transfer to oven, and bake until just set in the center, 30 to 35 minutes. Cool on a wire rack for about 10-15 minutes before slicing. 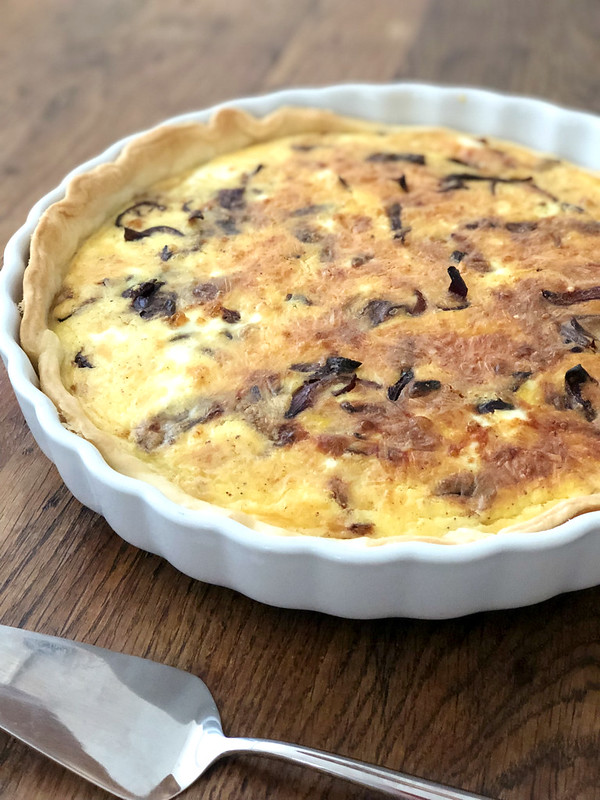