My second day here in Copenhagen, but my first full day.

I loved waking up to this view from my friend's balcony. I think it's kinda lovely. But it was even lovelier getting out breakfast just steps away, at my
new favorite bakery, Brødkunsten.
My friend suggested I'd try their cinnamon rolls, so I did! Wow! One of the best cinnamon rolls I've ever tasted.
Complete with cool skim milk makes this breakfast perfection.

So off to the city centre!
Along the way, and crossing the bridge I just had to stop to take in
the beautiful sights of Copenhagen. I would love to do my daily-run here.
I also spotted swans in the river here :)

And how cool is this?!
A meter on the bridge that counts the cyclists that pass.
It was funny seeing how the number went up and up!
So Danish. After all the sweets, walking and new impressions, I was pretty hungry
and in the mood for a hearty meal. I stopped at a place called Redfellas
and ordered their ABC sandwich; advocado, bacon and chicken on brown
bread with vitamin water. Very fulfilling! And of course, a proper lunch needs a proper dessert, so on my way back
I stopped at Brødkunsten again and ordered a raspberry-filled
shortbread, called hinbærsnitter in Danish and another chocolate roll. I'm in love with this place!
Some photos from their Facebook page: 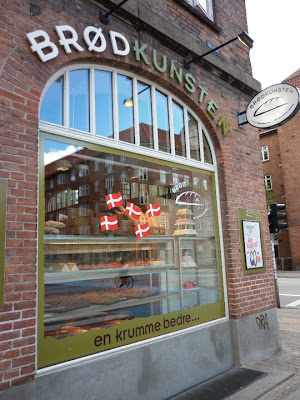 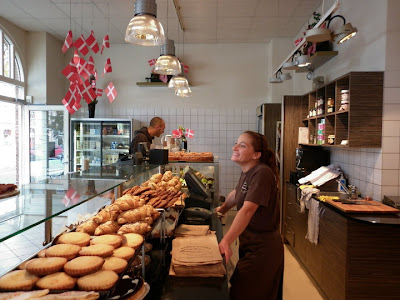 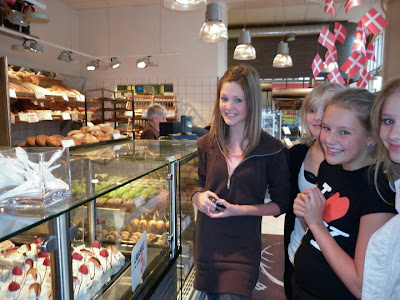 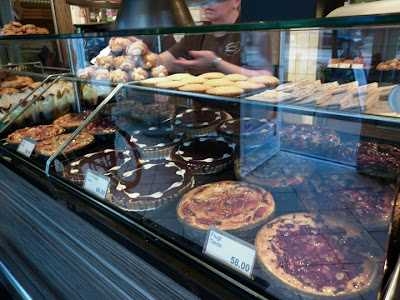 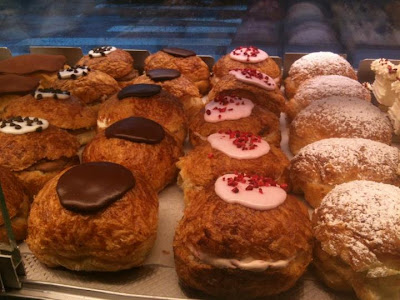 Way too many sweets for me to try out this trip...
This calls for a returning visit to Copenhagen!

Some more observations made about Denmark today:

#5 Danish children do now have to learn Chinese in school. Starting from age 8 till 18. This is all part of the Danish government trying to ensure a wealthy future for Danes, since China has a booming economy. Not a bad idea. Danes are also taught English, and French or German in school. This is all informed to me by my Danish friend who's mother is a English/French/Danish teacher.

#6 Danes speak perfect English. We in the Netherlands are known for speaking at least 2 other languages other than Dutch (though I must confess that after high school, my German has plummeted). We learn English at age 10 in school, but pick up the language even earlier because of the American tv-shows shown in Holland. We speak English pretty well. But Danes speak it even better, and, with no accent. In a store, my Danish fails me after Hej! and Tack! So when I start speaking English, the salespersons speak it back elaborately and without even blinking an eye.

#7 Danes wear helmets when riding their bikes. This might not be strange to most people. Especially when you know how fond Danes are of riding bikes to get from point A to B. But the Netherlands is a bike-loving-riding country as well, an no one EVER wears a helmet. EVER. If you insist that your Dutch son or daughter wears a helmet when riding his/her bike, then you're a hermit secluded from society and have lost touch of reality. It's not even brought up in parenting books in Holland. It might be safer, and it doesn't give you that bad of hair, but we just don't wear them. Black helmets that cover the ears are very popular in Copenhagen.

#8 Danish women wear their hair in an ultra-high bun. I'm talking a bun that's just 5 centimeters away from their foreheads. No buns that are close to the neck. I sometimes wonder if it's even gravitationally possible for the bun to stay up straight. I caught my Danish friend making her bun. She bends over as far as she can, and then sweeps all of her hair close to her forehead, makes a bun and ties it with an elastic. And she never looks in the mirror when making it; if there are chunks showing or hair falling out of the bun, Danes don't care. Unless you're a guy. See my next observation:

#9 Danish men have the most 'fashion-forward' hair styles. I use ' ' signs in the word 'fashion-forward' because it might not be everyone's cup of tea. It isn't mine. Don't worry, Danish men have plenty of other great attributes; they're super tall, naturally ripped, well-dressed, gorgeous faces and have nice legs. Oh and they're good with children. Danish men look like they spend a minimum of 5 hours doing their hair. The more spikes and unnatural swoops, the better.

#10 All Danes are blond. By birth or bottle. There are also quite a few of natural redheads in Denmark. And ALL Danes have blue eyes. There is no exception on this. On the very rare occassion when you meet a Dane with brown hair, he or she will still have blue eyes. I get asked occasionally "where I'm from" since I'm obviously not Danish (brown/redish hair with dark brown eyes). When I respond with "the Netherlands", they immediately know that's only half the truth and say "The Netherlands? You don't look Dutch. You don't have blond hair or blue eyes". When I tell them I'm also half African-American, they say "Yeah, I could tell you have some exotic blood in you." No one EVER recognises that I'm bi-racial in the Netherlands. But we don't all have peroxide-blond hair in Holland.

Unknown said…
Oh man those pastures; you're torturing me here. :P I wanna go on all these trips you take. They look like so much fun. And I love the observations you make. I wanna meet a Dutch boy!
August 30, 2012 at 2:06 AM

Hi Lovely!
You write quite entertaining, and it's interesting to read your observations done among the natives. Thaks for sharing!

Ps. It's not mandatory for Danish schoolchildren to learn Chinese. It's just a suggestion, that the schools will be allowed to provide Chinese as a subject, if they want to.

Pps. Danish people comes in many colours, but the most typical is a pasty pale/pinkish colour, and as far as I know 90 percent of the girls are not real blonds ;-)

Ppps. A very large cinnamon bun (even with skimmed milk) is really not a healthy breakfast. It's certanly not a typical danish breakfast, but I wish it was! =D
August 30, 2012 at 11:46 PM

Paris Pastry said…
Pppps. The thing about the 'healthy breakfast' was my intention to get a REAL healthy breakfast, but ended up being lured to buy delicious Danish pastries. As explained a few paragraphs later ;) A post about my usage (& Danish) of sarcasm in a later post.
August 30, 2012 at 11:58 PM

PiaMarianne said…
Very interesting to see our beautiful capitol through a tourists eyes.
Thanks for all the kind words on my little country and the danes in general :)
September 16, 2012 at 8:53 PM