My third and last full day has arrived and I promised myself, that after
all that shopping, I'd go to see loads of touristic sightseeing;
the sandsculpture festival on the beach, the cake festival in the park,
and go to see the little mermaid one more time.

Well, I'm not feeling so good. Nothing serious but I just got a little
late to bed last night. Yes, there was a party involved.

Anyway after noon, I really motivated myself to get up and go do something.
After a quick trip to the grocery store, I head down to every-tourist-must-see, Nyhavn. Ahhhh, I can never grow tired of this sight!

Onnnn to the little mermaid! Lovely, isn't she?
I hear there's a male counterpart somewhere in the city...
Something to look for on the next trip!

I picked a few free Danish newspapers along the way.
They have the same Metro newspaper as we do in the Netherlands.
Though, if you look closer, you'll see that the Danes have far better covers than we do: And I'm ending this short day with my favorite beer, which is really hard to find
outside of Denmark; Carlsberg. Love it! That was the only size they had, mind you!!

#14 Danes hire non-Danish speaking personel in clothing stores and restaurants. As extra help. In several clothing stores I've visited, the person who helps you in the fitting room, or folds the clothes and hangs it back in the racks, was foreign and didn't speak Danish. They are mostly students from England, Germany, France, or any other Western-European country and are looking to make a little extra money on the side. It's often a real pain for a student to find a part-time job in a country in which he/she is studying for that semester. But Danes welcome the English-speaking export and chit-chat all day long with their new foreign co-worker. I went to lunch with my Danish friend and the guy serving us and working behind the bar was Italian and confessed his Danish wasn't very good and preferred to speak in English. I would find it annoying if I couldn't speak my language to everyone in my own country, but young Danes don't seem to mind. (I say young Danes because the older generation of Danes are often opposed to foreign expats living in Denmark.)

#15 Danes are sarcastic and have a dark sense of humor. Welcome to my world! Hello, my name is Daniëlle and I speak sarcasm fluently. I do it because I find everything funnier when it's sarcastic and often wonder how long it will take someone to notice I'm being sarcastic. It's also a way for me to deal with idiots I often encounter at my job. It's not coming from a negative place though. I am in no way pessimistic, but I often have to bite my tongue in the Netherlands when I feel a sarcastic comment popping up in my head. Not here. Everyone thinks like me here and has the same, slightly darker, sense of humor =) 'Danish sarcasm' it is called.

#16 Danes love to pull pranks. I first discovered this when I met a couple of Danish guys over a year ago. They always would try to out-prank each other. Not in an annonying way, but more of a humorous way of enjoying their time together. They were grown men in their thirties so I couldn't attribute it to 'being young'. On my trip here in Copenhagen, I woke up one day to find that my bike was completely covered in party-decorations. Oh, and a chain-lock to which I don't have to key, is stuck in the middle-section of my bike. Then, last night there was a party downstairs... The result is that an unidentified prankster placed a doormat in front of my doorstep and a few others at my floor (it's actually a pretty cute one!). And the last example I can give you is that as I'm typing this, there are a couple of Danish guys across from my building singing and acting silly on the balcony. Irritating? Nope. I can't help but giggle; that dark humor again =) 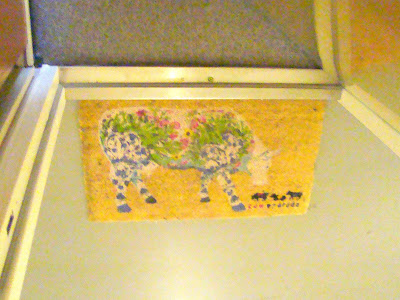 The 'cow' doormat that was, I'm assuming drunkenly, placed in front of my door.

I, too, like dishing out sarcasm, but I usually can't pick it up when someone dishes it out to me. Usually I don't know how to answer to sarcasm.

I like the cow mat. It's very artsy and would probably go with this painting my parents have somewhere in the house.
August 31, 2012 at 9:24 PM