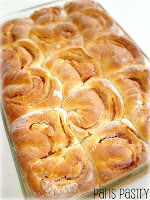 I began reading a new book I bought a few weeks ago – ‘The Winter Lodge’ by Susan Wiggs. The first chapter started with a recipe (a book after my own heart!) for Kolaches (a Polish pastry) and it said: “It’s funny how so many bakers are intimidated by yeast. They see it listed as an ingredient in a recipe, and quickly flip the page.” Am I intimidated by yeast? Maybe a little, I’ll admit. I have no problem baking anything bread-related, for instance a brioche, chocolate swirl brioche or no-knead bread. But if it’s more complicated than a simple bread, it tends to fail on me sometimes… I guess I’ve always steered away from yeasted goods because I didn’t have a stand mixer. But now that excuse isn’t valid any more since I bought one a few months ago.

So on this particularly hot day (when it’s warm, the dough rises really well) I made some Norwegian Cinnamon Buns. I chose these purely by name; the ‘Norwegian’-part caught my attention because I’ll be visiting Norway this summer (63 days and counting!). And so in the name of research, I felt like I had to make these. Any excuse will do.

On to the prepping and baking-part: these were quite easy to make. The dough only needed to rise for 25 minutes, which, I was very skeptical about, but it really did need only 25 minutes. I actually made these cinnamon buns twice this week. The first time I did everything exactly according to the recipe, and the second time I tweaked the recipe a little, and voila! – perfection! (my “tweakings” are scribbled down below in purple) Rating: 5- out of 5.

Norwegian Cinnamon Buns recipe: Nigella Lawson - How To Be A Domestic Goddess

- roasting pan approx. 13 × 10 inches or large square pan, lined with parchment or wax paper
(The second time I made these, I used a larger pan because I didn't fill the pan with a 'dough-bottom'. Oh and I ran out of parchment paper so I waxed the pan really well with butter)

Instructions:
- Preheat the oven to 450ºF. (I wouldn’t do this until after the dough has rested for 25 minutes, AND I reduced to oven temperature to 400ºF so they wouldn’t burn like Nigella’s)
- Combine the flour, sugar, salt, and yeast in a large bowl. Melt the butter and whisk it into the milk and eggs, then stir it into the flour mixture. Mix to combine and then knead the dough either by hand or using the dough hook of an electric mixer until it’s smooth and springy. (You’ll probably need to add a bit more flour. I added about 4 tablespoons) Form into a ball, place in an oiled bowl, cover with plastic wrap, and leave it to rise for about 25 minutes.
- Take one third of the dough and roll it or stretch it to fit your pan; this will form the bottom of each bun when it has cooked. (The first time I made these buns, I followed these instructions, but the second time I used all of the dough to make the buns. Meaning, no bottom. I rolled out the dough to about 30 by 10 inches) Roll out the rest of the dough on a lightly floured surface, aiming to get a rectangle of roughly 20 by inches. Mix the filling ingredients in a small bowl and then spread the rectangle with the buttery cinnamon mixture. Try to get even coverage on the whole of the dough. Roll it up from the longest side until you have a giant sausage. Cut the roll into ¾-inch slices, which should make about 20 rounds. (I cut mine a bit thicker and got 16 rounds with the entire dough) Set the rounds in lines on top of the dough in the pan, swirly cut-side up. (Give your buns a bit of space. If you don’t, the buns will rise incredibly high when baking) Don’t worry if they don’t fit snugly together as they will swell and become puffy when they prove. Brush them with egg and then let them rise again for about 15 minutes to let them get duly puffy. (I skipped the brushing with an egg, because these buns get dark enough as it is!)
- Put in the hot oven and cook for 20-25 minutes, by which time the buns will have risen and will be golden-brown in color. Don’t worry if they catch in places. Remove from the pan and leave to cool slightly on a rack – it’s easy just to pick up the whole sheet of parchment and transfer them like that – before letting people tear them off, to eat warm.

“You’re not going to blog about these, are you?”
“Of course I am! Why not?”
“Because they are ugly. This looks like a giant bread loaf.” 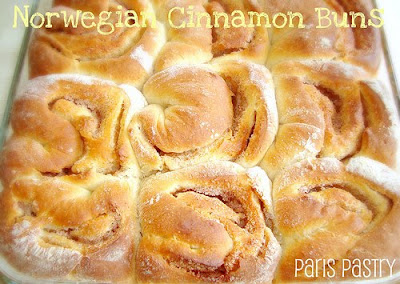 Ouch! A brilliant observation made by my brother. 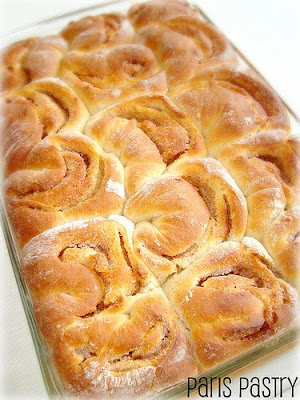 I’ve become a bit of a snob with cinnamon buns since I started making them
from scratch. Store-bought buns just don't compare anymore ... 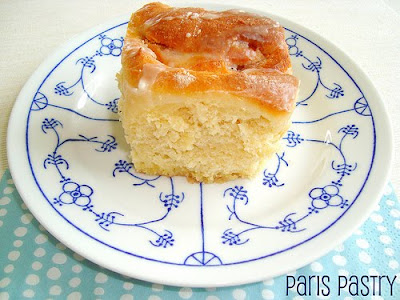 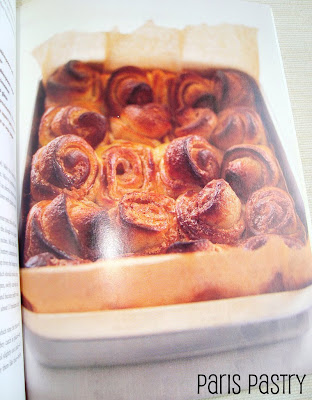 Ingrid_3Bs said…
I looked over the recipe and it's fairly similar to cinnamon rolls. I wonder what makes this "Norwegian" ones?

Vær våken said…
They look very good! My mother has made these several times! Cinnamon rolls to me are very Swedish, but these actually look more Norwegian like.

D e g a i n e said…
That looks delicious!!!! I have recipes on my blog too but yours are amazing!

Lot-O-Choc said…
Mmmmmm cinnamon buns these look delicious, ive made them before but i still have yet to try them, yours look gorgeous!! :D
June 16, 2010 at 9:46 AM

Sinful Southern Sweets said…
I once was afraid of yeast, but I'm glad I overcame it! I will certainly be making these lovely rolls. With that much yeast, I know they are heavenly!!
June 16, 2010 at 12:45 PM

Leslie @ A Blonde Ambition said…
I'm usually terrified to use anything with yeast, but this recipe makes me want to try it!
June 16, 2010 at 5:58 PM

Anonymous said…
Gosh, mine always burn your cinnamon bread looks real good!
I've just published a post to your site with a photo...
November 22, 2010 at 10:37 PM