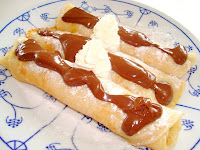 February 5th will be ‘World Nutella Day’, and to get you into the mood here are this week’s poll winner: Nutella Pancakes! I planned on using Nigella Lawson’s recipe but I made so many alterations, I can hardly attribute anything to her. Nigella’s recipe called for 8 store-bought crêpes, I made 14 Dutch pancakes or pannekoeken. They are very similar to crêpes, but they’re a lot thicker. I also omitted the Frangelico (a hazelnut liqueur) in Nigella’s recipe, because I did not want to spend $15 on liquor that I have no intention of using beyond this recipe. And I did not use any hazelnuts. See? This recipe is kind of my own! But not to worry, I wrote down both recipes for you. And now for the rating … well what do you think? Nutella + pancakes … was there anyway that this was not going to be good?! Exactly! 5 out of 5.

Instructions:
- Combine the flour, salt and sugar in a large bowl. Add ¾ cup of milk and mix with a whisk to combine. Add the remaining ingredients (¾ cup milk, 3 eggs, ½ tablespoon vanilla) and mix until smooth.
- Heat a skillet over medium heat, and coat with butter or oil. Scoop about ¼ cup of batter into the skillet, and tilt the pan to coat the bottom. Cook until the top begins to form air-bubbles and the bottom begins to brown. Carefully slide a spatula under the pancake and flip. Cook for a 20 seconds on the other side, just until browned. Remove to a plate, and repeat with remaining batter.

Nutella addition: I warmed ½ cup of Nutella in the microwave for 20 seconds, so that it would be easier to spread on the pancakes.

Instructions:
- Preheat the oven to 200C.
- Put each crepe in front of you and spread some Nutella over one half, then fold the unspread side over the spread side. Now add a dollup of Nutella over one quarter and fold again. Place on a buttered swiss-roll tin or similar. Proceed with the remaining crepes, overlapping them a little in the tin as you go.
- Put the butter in a small pan with the Frangelico, and heat gently to melt. Pour over the crepes in their tin and sprinkle most of the chopped hazelnuts on top. Bake for 10 minutes.
- Meanwhile, whisk the cream with the remaining 2 tablespoons Frangelico until you have an aerated soft floppiness, and put into a bowl, sprinling with the last of the crushed hazelnuts. This luscious cream is a must alongside the sweet, buttery, heavenly crepes. 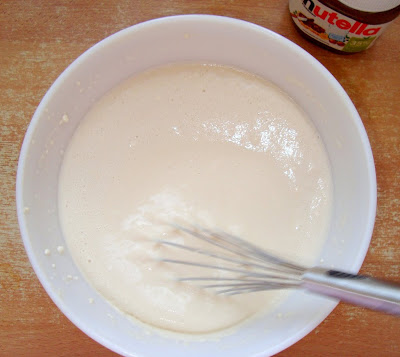 A stack of pannekoeken. 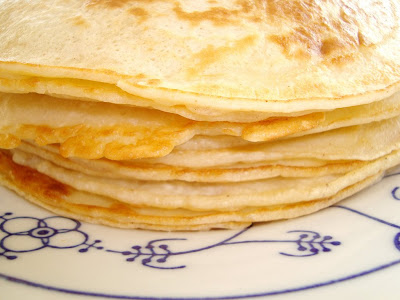 This dish was so good it should be outlawed! Seriously, Nutella on pancakes is Satan's way of luring me from my New Year's resolutions. 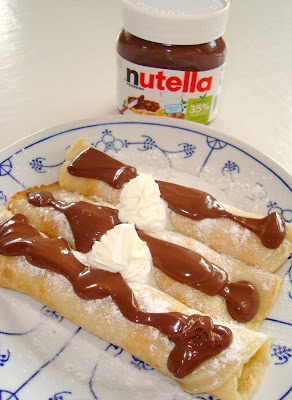 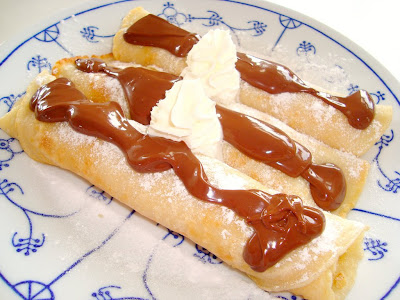 Of course I didn't eat all three ... what do you take me for? 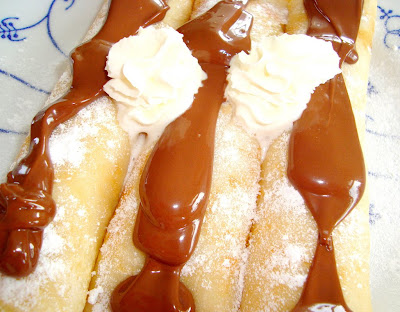 Unknown said…
Thanks for letting me know about Nutella Day, I will have to think of something to do myself. I would like to eat all of these pancakes but I am behaving myself at the moment.
January 7, 2010 at 12:43 AM

Ashley said…
Much better than store-bought crepes. I need to try Dutch pancakes. Thanks for sharing!
January 7, 2010 at 1:09 AM

A Bowl Of Mush said…
Oh yum!! I want to eat this right now!!

Duchess of Tea said…
Darling you have a delicious blog and a new follower...me. Looking forward to returning here for more mouth watering recipes.

VelezDelights said…
Yummmmmyyyyy..... I'm already a big fan of crepes with Nutella, so I can't imagine how much I would enjoy these pancakes with Nutella :)
January 9, 2010 at 3:31 AM