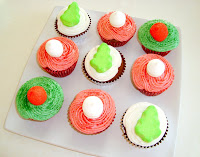 Nigella Lawson names these cupcakes “somewhere between chocolate and gingerbread”. I would say they taste 75% of gingerbread and 25% of chocolate. These cupcakes are the perfect Christmas cupcakes! Normally, chocolate cupcakes are my least favorite kind, but with the holidays I really enjoy them. The gingerbread flavor comes from using instant coffee. I was a little apprehensive about this, since I don’t like coffee, but they turned out great! Nigella Lawson uses instant royal icing, I used a buttercream frosting. Looking back, I wished I had used a chocolate frosting, because that would have really brought out the chocolate flavor in the cupcakes. If you’re looking for a great chocolate frosting click here. Rating: the cake itself gets a 4.5, had I used a chocolate frosting I’m sure I would have rated them 5 out of 5, but now they get a 3.5. The combination of chocolate – gingerbread and buttercream just isn’t what it ought to be.

Chocolate - Gingerbread Christmas Cupcakes recipe: Nigella Lawson - How To Be A Domestic Goddess

Instructions:
- Preheat the oven to 400°F. (I think 400°F for cupcakes is too high, so I set the oven at 375°F)
- In a large bowl, mix together the flour, baking powder, baking soda, mixed spice and salt. In another bowl, cream the butter and sugar with an electric mixer. Add the eggs one at a time, mixing well after each addition, and then beat in a third of the flour mixture followed by a tablespoon of the sour cream, repeating till all is used up.
- Put the water, chocolate, and instant coffee in a pan and heat gently, just until the chocolate is melted. Fold this into the cake batter, but don’t overbeat. The mixture will be very thin, but don’t worry about that: just pour carefully into the waiting muffin cups and put in the oven for about 20 minutes, until each little cake is cooked through but still dense and damp. (mine weren’t that dense and damp) Let cool in the pan for 5 minutes, then slip out the cakes in their papers and sit on a wire rack until completely cold.

I have yet to find a chocolate cupcake recipe that doesn't produce cracked toppings! I don't mind it though, I think it looks very home-made. 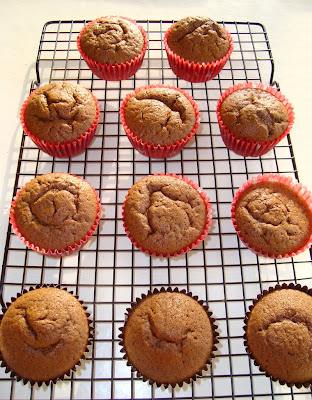 Sugar-covered marshmallows. The little Christmas trees are my favorite. 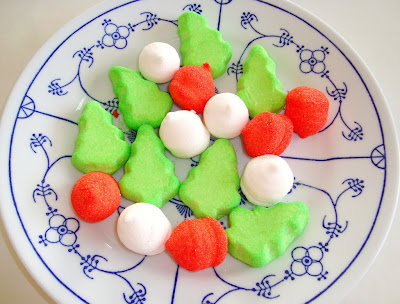 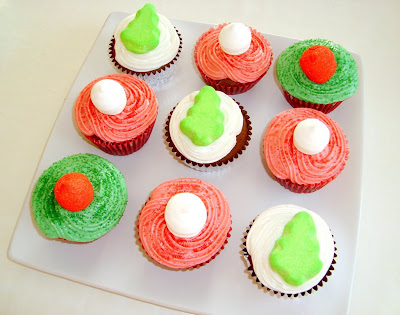 I LOVE these cupcakes, they're so perfect for Christmas! But next time I'll use a chocolate frosting, I think that would really bring out the chocolate flavor of the cake. 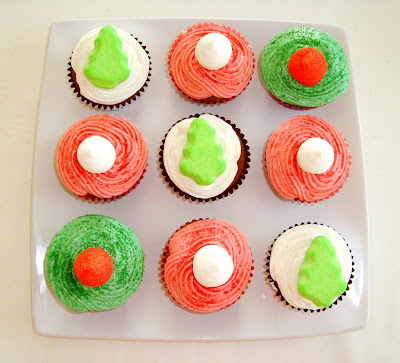 Unknown said…
These look lovely, I like how you've decorated them. I prefer big squidgy stuff on cupcakes instead of gritty sprinkles.

By coincidence I have some gingerbread cupcakes based on a Nigella Domestic Goddess recipe on my blog at the moment too. I used the gingerbread with lemon icing recipe without the icing and divided it into paper cases instead of using a loaf tin. It was highly successful and I recommend you try it some time. I hadn't noticed she actually had a specific gingerbread cupcake recipe in there so I must check that out too.
December 17, 2009 at 3:33 PM

A Bowl Of Mush said…
These are wayyy too much fun!!
so beautifully decorated!

apparentlyjessy said…
Yum Yum YUM! I am making gingerbread cupcakes tomorrow, I hope they turn out looking as lovely and tasty as yours do!
December 21, 2009 at 12:12 AM

Xiaolu @ 6 Bittersweets said…
So wonderfully festive. The people who get to admire these in person and eat your treats are so lucky :).
December 28, 2009 at 6:48 AM