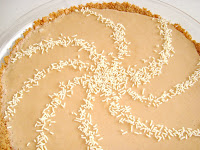 The Peanut Butter Chiffon Pie won by a landslide in weekly poll! I'm guessing the unusual combination of peanut butter & pie won most of you over (or maybe the fact that Thanksgiving just passed and you're in a pie-mindset). Let me tell you a bit more about this pie: it's a no-bake pie that integrates a rich peanut butter custard with whipped cream. I always find some kind of 'first' when baking anything, and this time it was my first time using gelatin. It was very easy to work with actually, though I think I should have used a little bit more because the pie did not set completely in the fridge. Aside from the some-what runny peanut-butter filling, I really liked this pie, but my family disagrees and are not charmed with it. (but hey, more for me!) I'd give it a 3.5 out of 5.

Instructions:
- Preheat an oven to 325°F. Pat the crumb mixture into a 9-icnh pie pan and bake for 8 minutes. Remove from the oven and let cool completely before filling.
- In a small bowl sprinkle the gelatine over the water and let stand for a few minutes to soften. (I followed the instructions of the gelatine package; put gelatine envelope in cold water for 5 min)
- Meanwhile, put the egg yolks in a medium saucepan and whisk them for a moment. Stir in ¾ cup of the sugar, the peanut butter and milk. Place over medium heat and cook, stirring constantly, until the mixture just reaches a simmer and thickens slightly but does not boil. Remove from the heat and add the softened gelatine, stirring until it is completely dissolved. Pour into a bowl and refrigerate, stirring now and then, until it mounds slightly when dropped from a spoon and no longer feels warm, about 1 hour or more.
- Whip the cream until stiff. In another bowl beat the egg whites until soft peaks form. Slowly ad the remaining ¼ cup sugar to the whites, continuing to beat until stiff peaks form. Gently fold the beaten egg whites and cream into the peanut butter mixture until completely blended. Mound the mixture in the crust and sprinkle with the peanuts, if desired. Chill several hours before serving. (I chilled it overnight)

Instructions:
- Make crumbs in a food processor or crush them with a rolling pin.
- Combine the crumbs and melted butter in a mixing bowl and toss together. With your fingers press and pat the mixture over the bottom and sides of a 9-inch pie pan, taking care not to make the sides too thick.

The rich peanut butter custard; delicious on its own. 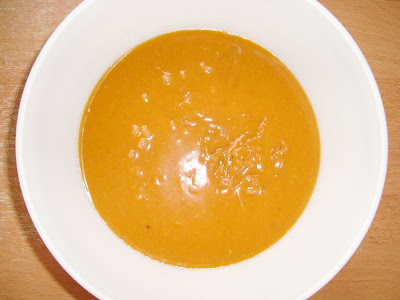 But even more so when it's lightened with whipped cream. 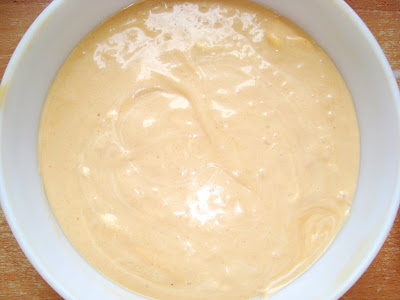 Mine looks pretty similar to the one pictured in the book. I used white chocolate sprinkles instead of chopped peanuts for the swirl-effect. 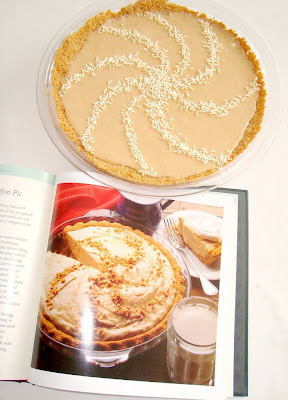 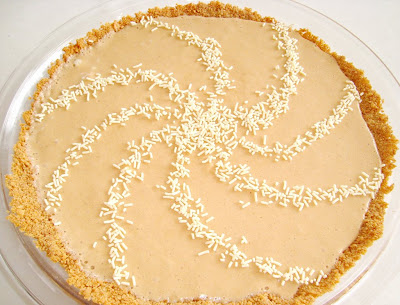 Xiaolu @ 6 Bittersweets said…
It does look just as pretty as the photo. Glad you enjoyed it. I always think it's worth trying something new and different =).
November 28, 2009 at 6:17 PM

Renata said…
Wow, so I voted to the right pie!! How wonderful this might be!!!

Chocolaty Lifestyle said…
What a good looking pie, perfect for celebrations! It must be not only good looking, but tasty as well. :)
November 29, 2009 at 5:43 PM