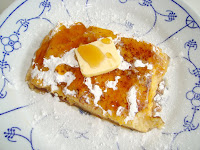 Have some white bread or challah wasting away? More than a few slices? Me too! Which is why I used 6 slices of old bread to make this Crème Brûlée French Toast. This french toast has a butterscotch base. Sounds pretty fabulous, but in all honesty I could have done without it. I thought adding maple syrup tasted better than the butterscotch. This Crème Brûlée French Toast has very positive reviews, both on Recipezaar.com and AllRecipes.com. I can't deny that this french toast is a 'special occasion' type of toast, but it's definitely not my favorite french toast recipe. Rating: 3 out of 5.

Instructions:
- Melt butter in a small saucepan over medium heat. Mix in brown sugar and corn syrup or honey, stirring until sugar is dissolved. Pour into a 9x13 inch baking dish. (don't worry if the butterscotch will turn hard)
- Remove crusts from bread, and arrange in the baking dish in a single layer (I had two layers).
- In a small bowl, whisk together eggs, half and half cream, vanilla extract, orange brandy, and salt. Pour over the bread. Cover, and chill at least 8 hours, or overnight.
- Preheat oven to 350 degrees F (175 degrees C). Remove the dish from the refrigerator, and bring to room temperature.
- Bake uncovered 35 to 40 minutes in the preheated oven, until puffed and lightly browned.

After cooling for 8 hours in the refrigerator. Down kitty! 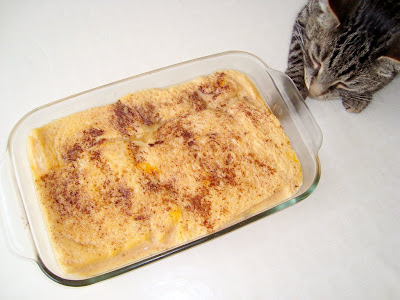 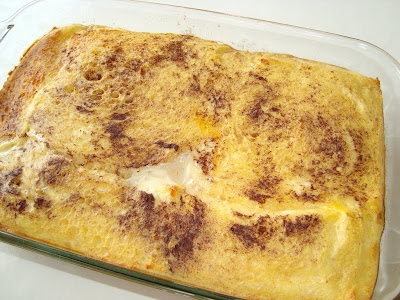 The smell that goes through the kitchen from the freshly baked french toast is divine! 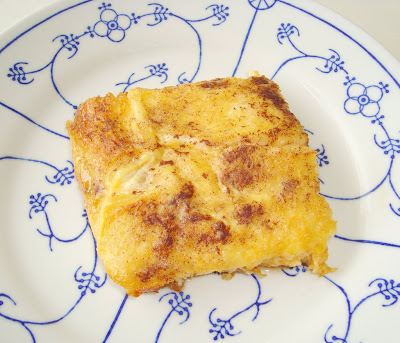 How To Eat A Cupcake said…
Aww kitty! So cute!

apparentlyjessy said…
Kitty wants some too!