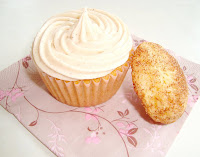 Instructions:
- Preheat oven to 350 degrees. Line standard muffin tins with paper liners. Sift together both flours, baking powder, salt, and 1 tablespoon cinnamon.
- With an electric mixer on medium-high speed, cream butter and sugar until pale and fluffy. Add eggs, one at a time, beating until each is incorporated, scraping down sides of bowl as needed. Beat in vanilla. Reduce speed to low. Add flour mixture in three batches, alternating with two additions of milk, and beating until combined after each.
- Divide batter evenly among lined cups, filling each three-quarters full. Bake, rotating tins halfway through, until a cake tester inserted in centers comes out clean, about 20 minutes. Transfer tins to wire racks to cool completely before removing cupcakes.

Snickerdoodles (cookies) recipe: Nigella Lawson - How To Be A Domestic Goddess

Instructions:
- Preheat the oven to 350 F.
- Combine the flour, nutmeg, baking powder, and salt, and set aside for a moment.
- In a large bowl, cream the butter with the 1/3 cup sugar until light in texture and pale in color, then beat in the egg and vanilla. Now stir in the dry ingredients until you have a smooth, coherent mixture.
- Spoon out the remaining sugar and the cinnamon onto a plate. Then, with your fingers, squeeze out pieces of the dough and roll between the palms of your hands into walnut sized balls. Roll each ball in the cinnamon-sugar mixture and arrange on your prepared baking sheets.
- Bake for about 15 minutes, by which time they should be turning golden brown. Take out of the oven and leave to rest on the baking sheets for 1 minute before transferring to a wire rack to cool. 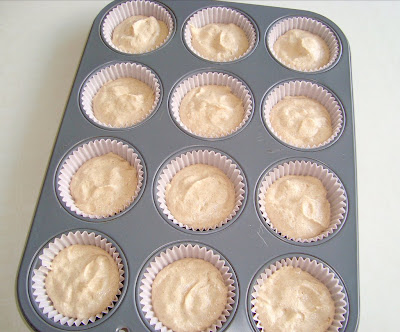 I didn't expect they'd turn so brown, because the batter was incredibly light. Looks good though, like a real snickerdoodle. 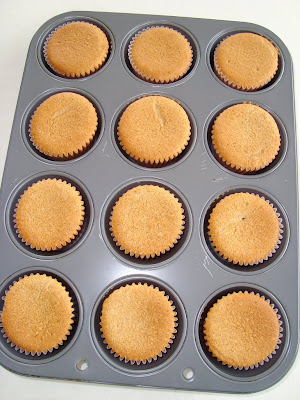 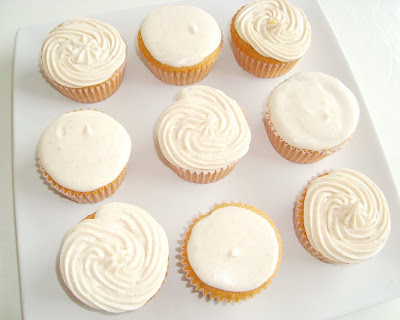 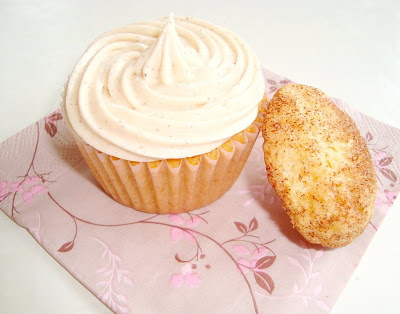 Sweetie said…
i'm a fan of the cookie based cupcakes and you did a great job! how was the texture of the cupcake (moistness, etc)? is it a good standard vanilla recipe?
July 4, 2009 at 1:29 PM

Paris Pastry said…
Absolutely! The texture of these cupcakes were amazing. One of the best I ever made in fact. Very light, dense and moist. I think if you omit the cinnamon, it would make a good vanilla cupcakes recipe. Maybe I'll try that out!
July 4, 2009 at 5:05 PM

Peggy said…
They look lovely! Do you think it would work to substitute some honey for some of the sugar in the cake, for a more pronounced honey flavour?
July 8, 2009 at 11:22 PM

Paris Pastry said…
Ummm, you know I tried to make some chocolate - honey cupcakes last month, and every time they sank! I tried 3 times with different recipes (recipes that worked for me before), so I'm guessing it has something to so with the honey! I will not try my hands at any honey cupcakes for a long time!! But you can try if you like :) Let me know how that worked out!