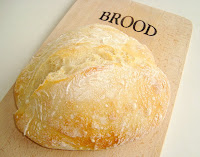 Yesterday I tried to make some cupcakes, but unfortunately the cupcakes weren’t so successful, in fact, I don’t think I’ve ever seen cupcakes sink so deeply! Luckily I don’t get frustrated easily, but later in the day I was still eager to bake something. See, for me the fun of baking doesn’t lie in the actual baking. I just love food and eating, so late at night I started making a no-knead bread, I just combined the ingredients and today I baked the bread. I found the recipe on one of my favorite baking-blogs HowToEatACupcake. It was very easy to make, which was perfect because last night I was in no mood to try out something complicated. The bread tastes really nice. I so love the smell and taste of warm home-made bread!

Instructions:
- Warm the water slightly: about 100°F.
- Add yeast and salt to the water.
- Mix in the flour. Add all of the flour at once, measuring it in with dry-ingredient measuring cups, by gently scooping up flour, then sweeping the top level with a knife or spatula; don't press down into the flour as you scoop or you'll throw off the measurement by compressing. You're finished when everything is uniformly moist, without dry patches.
- Cover with a lid (not airtight) that fits well to the container you're using. Allow the mixture to rise at room temperature until it begins to collapse (or at least flattens on the top), approximately 2 hours, depending on the room's temperature and the initial water temperature. Longer rising times, up to about 5 hours, will not harm the result.
- Refrigerate the dough overnight (or at least 3 hours). (you can keep the dough in the refrigerator for 14 days)
Baking Day:
- First, prepare a pizza peel by sprinkling it liberally with cornmeal to prevent your loaf from sticking to it when you slide it into the oven. (I floured parchment paper and baked my bread on the parchment) Sprinkle the surface of your refrigerated dough with flour. Pull up and cut off a 1-pound (grapefruit-size) piece of dough (mine was a bit bigger), using a serrated knife. Hold the mass of dough in your hands and add a little more flour as needed so it won't stick to your hands. Gently stretch the surface of the dough around to the bottom on all four sides, rotating the ball a quarter-turn as you go. Most of the dusting flour will fall off; it's not intended to be incorporated into the dough. The bottom of the loaf may appear to be a collection of bunched ends, but it will flatten out and adhere during resting and baking. The correctly shaped final product will be smooth and cohesive. The entire process should take no more than 30 to 60 seconds.
- Rest the loaf and let it rise on a pizza peel for about 40 minutes to 1 ½ hours. (It doesn't need to be covered during the rest period).
- Twenty minutes before baking, preheat the oven to 450°F, with a baking stone placed on the middle rack. Place an empty broiler tray for holding water.
- Dust the top of the loaf with flour, which will allow the slashing knife to pass without sticking. Slash a ¼-inch deep cross, 'scallop', or tic-tac­-toe pattern into the top, using a serrated bread knife.
- With a quick forward jerking motion of the wrist, slide the loaf off the pizza peel and onto the preheated baking stone. Quickly but carefully pour about 1 cup of hot water from the tap into the broiler tray and close the oven door to trap the steam. Bake for about 30 minutes, or until the crust is nicely browned and firm to the touch.

After sleeping in the refrigerator for 1 night, my dough looked like this: 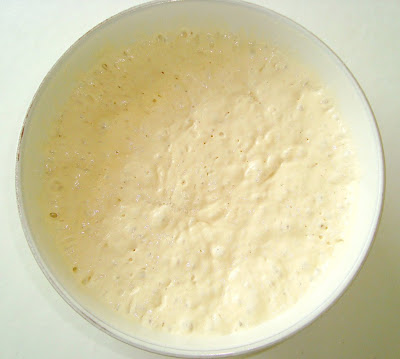 My bread-dough. This is pre-rise and pre-oven (obviously). Yeah my bread isn't exactly a 'boule' (French for ball). What can I say? I just love a misshapen bread loaf! 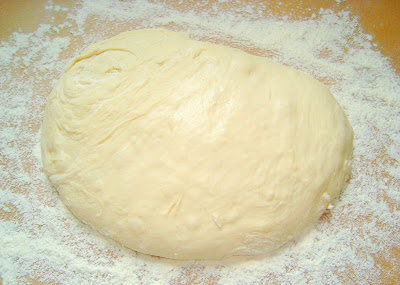 Right out of the oven, cooling. 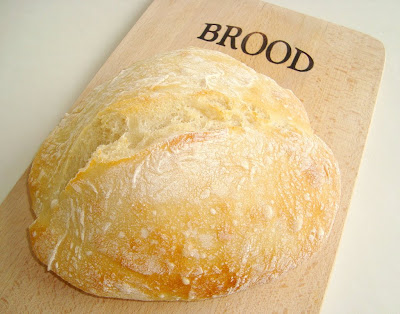 Hmm, I love the smell of warm bread! 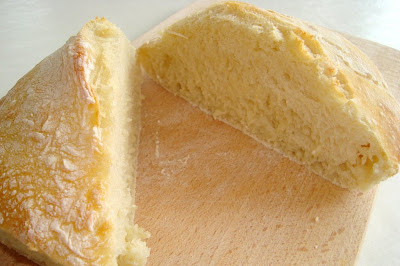 "Brood" means bread in Dutch, in case you didn't figure that one out! :P 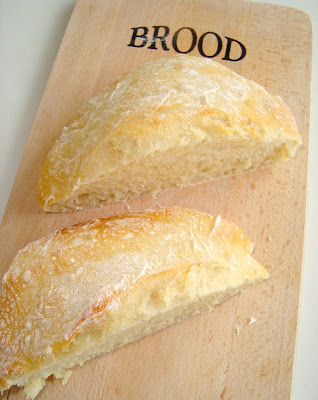 Simon Butler said…
I love your blog - I am amazed at how much you bake each week but I enjoy reading all about your exploits.

This loaf looks lovely. Have you tried any other no-knead recipes? I bake a loaf of no-knead bread each week and follow the recipe from the New York Times here. You can see my efforts here, here and here
June 10, 2009 at 10:24 PM

Stephanie said…
Your photos bring this to life. I can practically smell the fresh bread, it looks so great. I found your blog through your flickr photos. I posted one of your laduree photos on my blog (crediting you of course) yesterday. I am looking forward to reading more of your blog.