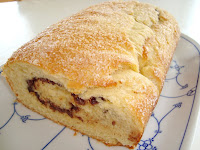 Ever since I made Pierre Hermé’s Brioche Loaf, I’ve been absolutely dying to make brioche again. But I don’t have enough time to re-bake things because there are so many recipes I haven’t tried and I'd like to try them… all! So I’m superglad the most of you chose the Chocolate Swirl Brioche. It’s a Martha Stewart recipe and it’s very easy to make. I prefer Pierre Hermé’s brioche, it tasted more like a proper brioche, but I expected that, he is French after all. But the chocolate swirl inside the brioche made up for a lot, so that is why I still rate this recipe 5 out of 5.

Instructions:
- Butter a large bowl; set aside. Stir together warm water, 1 teaspoon sugar, and the yeast in a small bowl. Let stand until foamy, about 5 minutes.
Put 4 cups flour, remaining ¼ cup sugar, and the salt into the bowl of an electric mixer fitted with the paddle attachment. Add yeast mixture; mix on medium speed until combined. Add 8 eggs, 1 at a time, mixing well after each addition; mix until well combined, about 2 minutes. Replace paddle with dough hook. Mix on medium speed 2 minutes.
- Add butter, 1 tablespoon at a time, mixing until combined after each addition. Mix until dough is smooth, shiny, and elastic, about 10 minutes. If dough is very sticky and wet, add up to ½ cup flour (only the bottom quarter of the dough should stick to the bowl); mix until combined. Transfer dough to buttered bowl. Cover with a clean kitchen towel, and let rise at room temperature until almost doubled in bulk, about 1 ½ hours. Punch down dough; cover with plastic wrap, and refrigerate overnight (at least 12 hours).
- Butter two 8 ½-by-4 ½-by-2 ½-inch loaf pans; set aside. Transfer dough to a lightly floured work surface. Divide dough in half. Roll out each half into a 7-by-15-inch rectangle. Sprinkle chocolate over rectangles. Starting from a short side, tightly roll each into a log; pinch seam to seal. Place each log, seam down, in a buttered pan. Cover with a clean kitchen towel; let rise at room temperature until dough reaches rim of pans and no longer feels cool, about 3 hours.
- Preheat oven to 375 degrees. Lightly beat remaining egg; brush tops of loaves with egg. Sprinkle with sanding sugar. Bake until tops are deep golden brown, about 35 minutes (cover with foil after 20 minutes if browning too quickly). Run a knife around edges of pans to loosen, and turn out onto a wire rack; let cool completely. 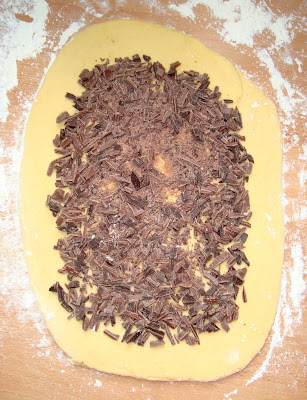 Before rising for 3 hours. 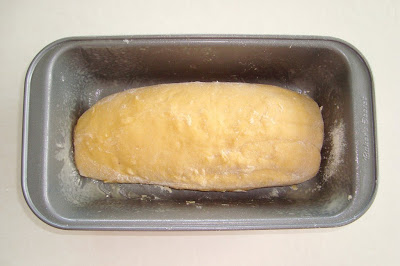 See that little indentation at the bottom? My cat stepped on the dough while rising... 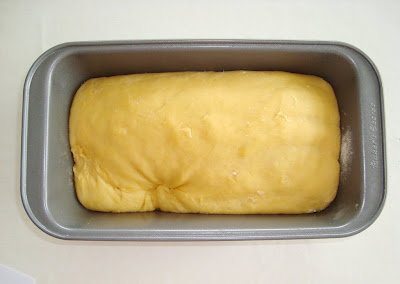 The chocolate popped out a little, but that’s ok, I like a sneak preview. 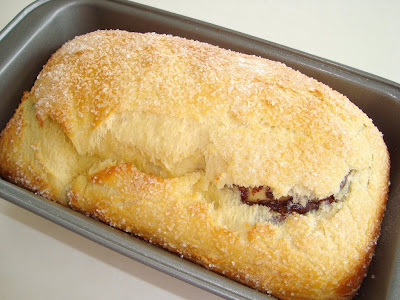 I love you, my brioche! 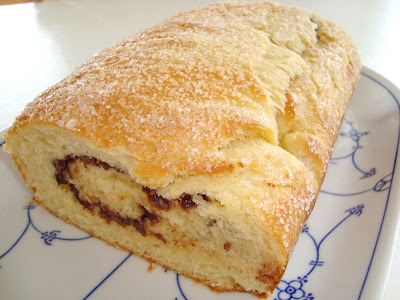 Chocolate + brioche. What were the chances that this wasn’t going to be good? EXACTLY! Zero! 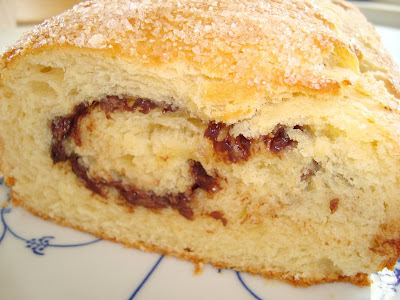 How To Eat A Cupcake said…
I've never made or tasted brioche, but I love kugelhopf and I've heard that it's similar. I bet I'd love this chocolate swirl brioche!
June 22, 2009 at 6:59 PM

A Bowl Of Mush said…
I loved the look of this so much that I decided to make it! It turned out wonderful and the texture was just perfect!
Thank you for my yummy breakfasts :)
July 16, 2009 at 5:44 PM

Anonymous said…
Since it is a bread, should I use bread flour instead? Bread flour supposedly helps yeast work and increases elasticity.
September 11, 2010 at 11:22 PM