a Dutch Apple Pie by a Dutch Girl 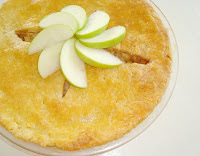 Baking a Dutch apple pie inevitably leads to the question: "what’s the difference between a ‘Dutch’ apple pie and a regular apple pie?" All of the Dutch apple pies I’ve ever tried seem to be more gooey than normal apple pies (god I love that!). After researching quite a bit, I read in a very very old Betty Crocker cookbook that Dutch apple pies use heavy cream in the apple filling. Just before the last 5 minutes of baking, you pour heavy cream into the slits of the pie. Indeed, this made it very gooey and moist. But honestly, we Dutch people aren’t king or queen at making apple pies, in fact, we don’t even really have pies. We have something similar called “taart”, which is more like a tart than an actual pie. Dutch apple pies aren’t really Dutch, just as French fries aren’t really French.

Instructions:
- In a large mixing bowl, combine flour, salt, and sugar. Mix well, then cut in shortening until mixture resembles coarse meal.
- In a small bowl, combine egg, vinegar, and 5 tablespoons of water. Whisk together, then add gradually to flour mixture, stirring with a fork. Mix until dough forms a ball. Add one more tablespoon of water if necessary.
- Cover dough ball in a plastic wrap and allow dough to rest in refrigerator 10 minutes before rolling out.

Instructions:
- Preheat oven to 425°F/220°C.
- Melt the butter in a saucepan. Stir in flour to form a paste.
- Add water, white sugar and brown sugar, and bring to a boil. Reduce temperature and let simmer for 2 minutes.
- In a medium bowl, mix the apple slices with the warm filling, by using a spoon.
- Place the bottom crust in your pan. Gently pour the apple mixture in the pan, then cover with the second pie crust. Make sure the top crust has slits to let the steam escape.
- Bake 15 minutes in the preheated oven. Reduce the temperature to 350°F/175°C. Continue baking for 35 to 45 minutes, until apples are soft and crust is golden brown.
- 5 minutes before end of baking, pour ½ cup heavy cream through slits of the top crust.

Granny Smith apples, which happens to be my favorite kind op apples. 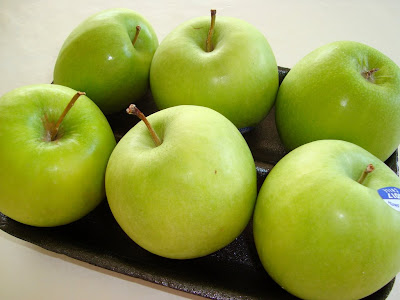 Chopping the apples into these little pieces took the most work. Here they are drenched with a butterscotch-ish sauce. 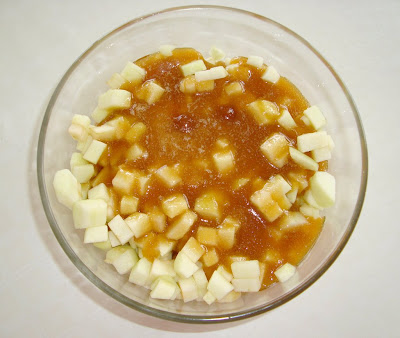 Before the pie went into the oven I covered the edges with foil, to prevent the edges from getting burnt. I hate burnt edges! 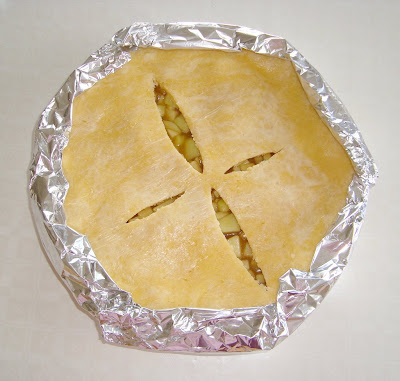 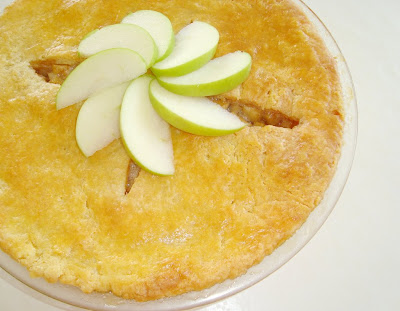 The recipe didn't call for any cinnamon so I forgot all about it. I really like some cinnamon with my apple pie, so I sprinkled it over my slice of pie. 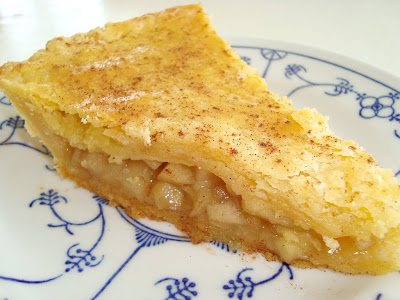 Chocolaty Lifestyle said…
The result looks so adorable! In Latvia apple is the most popular fruit and apple pies are very popular, but I haven't found the moust delicious recipe for me. So this is the thing I have to try! :))
May 19, 2009 at 7:39 AM

apparentlyjessy said…
There is NOTHING better than a slice of apple pie on a cold winters night...I want to make this very soon!
May 19, 2009 at 12:30 PM

Anonymous said…
This looks so good! I wish I could have a slice right now! And I love that we both have the same dishes. My husband is from that very northern island region of Germany!!
February 14, 2011 at 11:57 AM