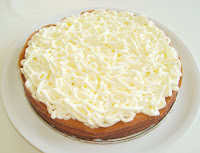 Wow, I’ve never had so many votes for my weekly baking-poll! Thanks to everyone who has voted and StumbleUpon.com who has listed my blog to their ‘Food’ section! The funny thing is, is that the percentage of the different choices stayed exactly the same with 15 votes up to 100 votes, so the Chocolate Cloud Cake is a well-deserved winner! Those who voted for the Chocolate Cheesecake; I’m probably going to make that one also very soon. The Chocolate Cloud Cake is a flourless chocolate cake and, as its name indicates, it’s very airy and light, like a cloud. The cake itself is basically a mixture of melted chocolate and whipped egg whites, which reminds me of Pierre Hermé because he uses that a lot! I think the cake looks pretty fabulous. It looks like a cake in that could be in a window display at a patisserie in Paris, but in fact it was so easy to make! It tastes nice. Nothing spectacular, but just a nice chocolate cake.

Instructions:
- Preheat the oven to 350 degrees F. Line the bottom of the cake pan with baking parchment.
- Melt the chocolate either in a double boiler or a microwave, add the butter and let melt in the warm chocolate.
- Beat the 2 whole eggs and 4 egg yolks with 1/3 cup of the sugar, then gently add the chocolate mixture, the orange-flavored liqueur and the orange zest.
- In another bowl, whisk the 4 egg whites until foamy, then gradually add the remaining sugar and whisk until the whites hold their shape but are not too stiff. Lighten the chocolate mixture with a dollop of egg whites, and then fold in the rest of the whites.
- Pour into the prepared pan and bake for 35 to 40 minutes or until the cake is risen and cracked and the center is no long wobbly. Cool the cake in its pan on a wire rack; the middle will sink as it cools.
- When you are ready to eat, place the still pan-bound cake on a cake stand or plate for serving and carefully remove the sides of the pan from the cake. Don't worry about cracks or rough edges, it's the crater look we're going for here. Whip the cream until it's soft and then add the vanilla and orange-flavored liqueur and continue whisking until the cream is firm but not stiff. Fill the crater of the cake with the whipped cream, easing it out gently towards the edges of the cake, and dust the top lightly with cocoa powder pushed through a tea-strainer.

The egg whites and mixture of melted chocolate, butter and eggs. 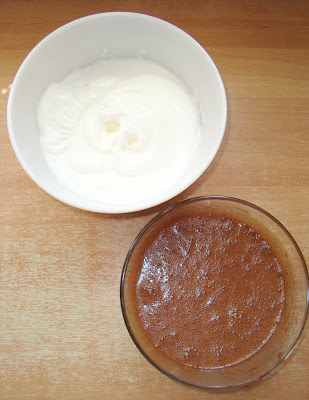 Right out of the oven. 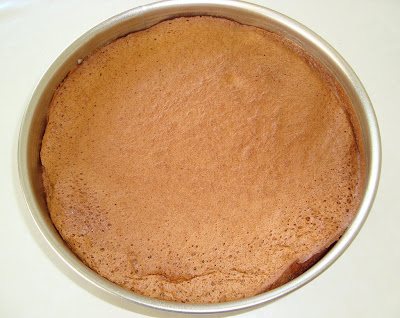 I don't know if you can see it in this picture, but the cake sank incredibly after cooling (as it's supposed to). 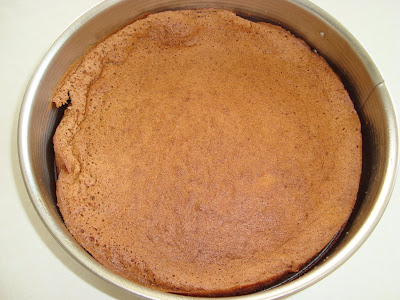 The chocolate kind of dropped to the bottom! 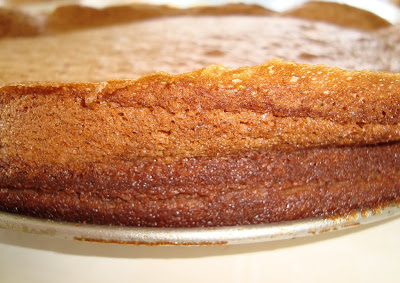 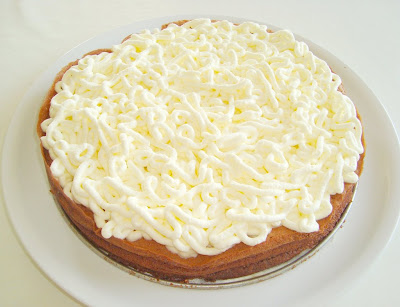 I still left the cake in it's pan. The cake is very thin and fragile and would be sure to break if I lift it up. Plus I wasn't in the mood for doing it. It's always my least favorite part. 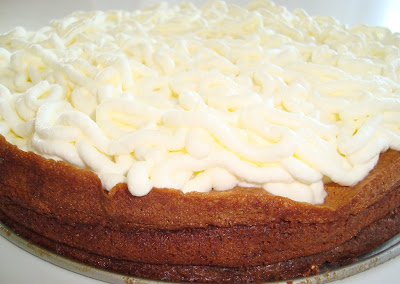 apparentlyjessy said…
I voted for this cake cause I thought it had a pretty name! Now I know what it is...its so interesting, I learn a lot from your blog! I like the topping you did on it.
May 26, 2009 at 1:54 AM

Amanda said…
I just found my way to your blog from The Red Deer's, so I wasn't here for the last vote. However, I would have voted for the chocolate cloud just because of the name.
May 26, 2009 at 3:53 AM