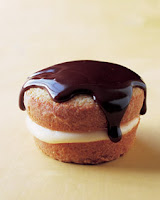 A Boston Cream Pie is one of my favorite cakes, so I was bound to love these cupcakes! Having made so many Boston Cream Pies before, gave me the advantage to pick out my favorite Chocolate Ganache and Vanilla Cream. I used Martha Stewart’s Yellow Cupcakes, which is a just a regular, but nice yellow cupcake recipe. The Chocolate Ganache is by Nigella Lawson and the Vanilla Cream also by Martha. Rating: 5 out of 5. Oh yeah, I know the Oreo Cupcakes didn’t win the poll but a lot of people have asked if I could make those anyway. I can’t make them anytime soon but I will promise I will feature the Oreo Cupcakes in another poll very soon to give them another chance!

Instructions:
- Preheat oven to 350°F/180°C.
- Butter the cups of a standard (12-cup) muffin tin.
- In a small bowl, whisk together flour, baking powder, and salt; set aside.
- In a liquid-measuring cup, mix milk and vanilla; set aside.
- In a large bowl, with an electric mixer, beat butter and sugar until light and fluffy, 3 to 4 minutes.
- Add eggs one at a time, beating well after each addition.
- With mixer on low speed, add half of dry ingredients, followed by milk-vanilla mixture, then remaining dry ingredients. Do not overmix.
- Divide batter evenly among prepared muffin cups (a 2-ounce or ¼-cup ice-cream scoop is good for this).
- Place tin on a rimmed baking sheet; bake until a toothpick inserted in center of a cupcake comes out clean, 20 to 25 minutes.
- Cool cupcakes 5 minutes in tin, then remove and cool completely on a rack before icing.

Instructions:
- Whisk yolks until smooth. Mix sugar, cornstarch, and salt in a medium saucepan over medium heat. Add milk in a slow, steady stream. Cook, stirring, until mixture begins to bubble and thicken, about 5 minutes.
- Pour 1/3 of milk mixture into yolks, whisking constantly. Return mixture to saucepan, and cook over medium heat, stirring often, until thick, 2 to 4 minutes. Stir in vanilla.
- Pass vanilla cream through a fine sieve into a bowl. Press plastic wrap directly on surface. Refrigerate until cold, at least 1 hour, or up to 2 days.

Chocolate Ganache recipe: Nigella Lawson - How To Be A Domestic Goddess

Instructions:
- Warm with heavy cream, vanilla extract and butter with the chocolate, chopped into small pieces, and bring to the boil in a thick-bottomed saucepan, by which time the chocolate should have melted.
- Remove from the heat and whisk till smooth and thickened.
- Let cool a little before using, but you want it still runny enough to ice the cupcakes with.
- Dollop spoonfuls of the chocolate icing on top, letting it spread on the cupcakes.

The batter in the cupcake tin. This is the first time I made cupcakes without using cupcake liners. 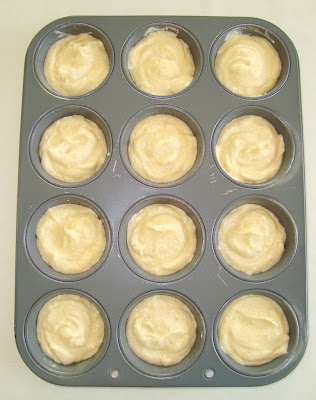 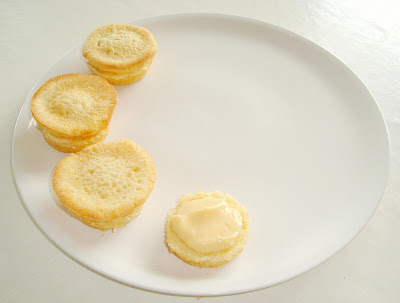 The chocolate ganache is in my opinion the best part of a Boston Cream Pie, so I wasn't scarce with dolloping it on the cupcakes! 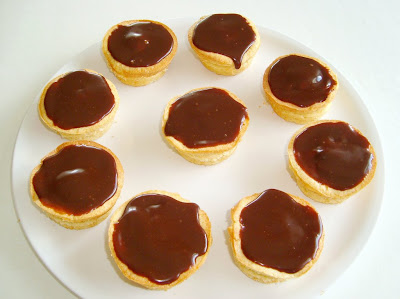 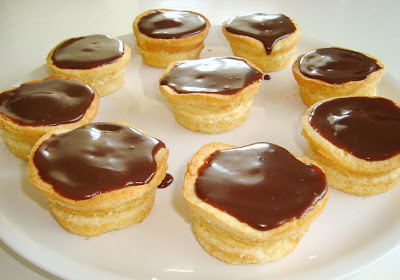 Snooky doodle said…
these look delicious. I ve just made some Bostom cream cuppies too I ll post them tomorrow. I m drooling now pity I can t grab one :(
May 31, 2009 at 10:29 PM

apparentlyjessy said…
Look at that ganache drizzle down the side...oh yum! I would give anything to reach into my laptop screen and take one of those buns right out for a bite...sigh, I must either be really hungry or loosing it! hehe
Gotta love Martha and Nigella, with their powers combined....!
June 1, 2009 at 10:42 AM

Unknown said…
These look amazing. I love the Nigella recipe for chocolate ganache!
June 4, 2009 at 7:32 PM