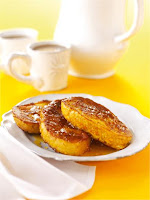 For days I have been craving to make Nigella Lawson's 'Orange French Toast', that I have only made once, a while ago. It is so good! It tastes very exotic, quite different from normal french toast, yet very familiar. To add a little twist to the normal white bread, I used slices of a baguette instead (as Nigella does the same in the picture). SeriousEats recommend using slices of challah for a fluffier result. The amber syrup is so wonderful; my idea of a perfect Saturday brunch! (or any day of the week for that matter)

Instructions:
- Whisk the eggs, milk, cinnamon, and orange zest in a wide shallow dish.
- Soak the bread slices in this mixture for 2 minutes a side.
- While the eggy bread is soaking, bring the orange juice, marmalade, and sugar to a boil, then turn down to a fast simmer for 3 to 4 minutes. If you need to, let this syrup stand while you cook the bread.
- Heat the tablespoon of butter in a skillet and cook the eggy bread for about 2 minutes a side over medium heat until golden.
- Serve the French toast with some of the amber syrup poured over each slice, and a pitcher of extra syrup on the side.

4 slices of baguette soaking up the eggy mixture and orange zest. 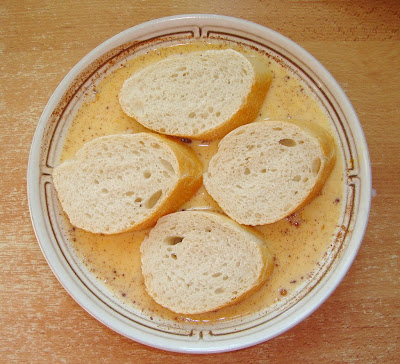 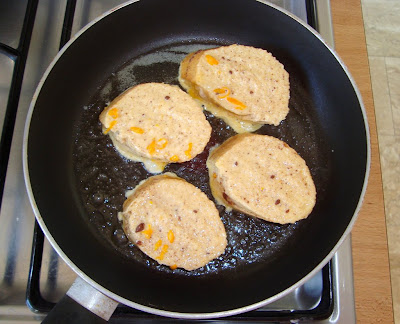 Yeah I didn't have anything prettier than a gravy-jug to put the amber syrup in! 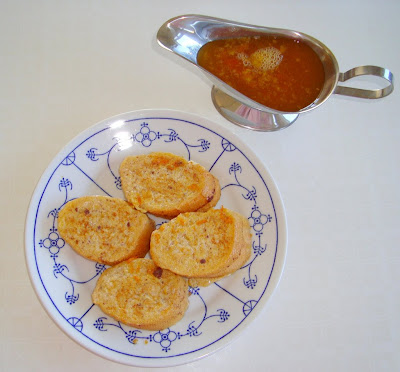 Yum! It is so delicious! Very exotic. I still have some amber syrup leftover so maybe I'll make some more later in the day. 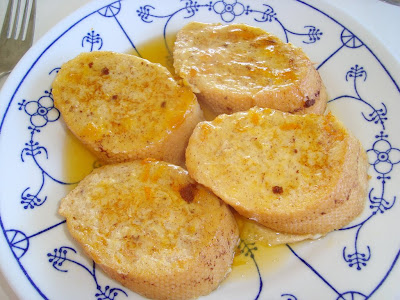 Pattie @ Olla-Podrida said…
French toast always sounds good, in fact I just made it a couple of days ago. Thanks for posting this recipe though, it gives me an excuse to make more!
November 10, 2010 at 5:55 AM