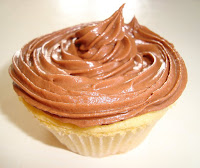 These little cuppies won the poll, and I didn't even mentioned that I would use a Nutella frosting for them! (I thought it would be unfair for the other cupcakes! :P) I was hoping on the Cassis Cupcakes myself. The recipe is adapted from Martha Stewart's 'Mexican Chocolate Pudding-Filled Cupcakes'. The pudding turned out terrific, but the cupcakes sank :(. What's interesting about these cupcakes is that it uses the 'fat flour method' to mix them. This means that you have to mix the dry ingredients first and then add the wet ingredients, versus creaming the butter and sugar first. It's supposed to make them light and fluffy, and my cupcakes certainly were light and fluffy, but it's a shame that they sank.

It says this makes 18 cupcakes, but I halved this recipe and still could have gotten about 18!

Instructions for Cupcakes:
- Preheat oven to 325F/170C with rack set in center. Line 18 standard-size muffin cups with paper liners; set aside.
- In the bowl of an electric mixer fitted with the paddle attachment, mix together flour, sugar, baking powder, and salt.
- Add butter and mix until well incorporated.
- Mix together warm milk and vanilla in a small bowl.
- With the mixer running, add milk mixture in three additions, scraping down the sides of the bowl after each addition.
- Add egg yolks and mix until well combined.
- Fill prepared muffin cups 1/2 full with batter. Transfer to oven and bake until cakes spring back when lightly touched, 15 to 20 minutes. (mine needed about 22 minutes)
- Let cupcakes cool slightly in their tins before transferring to a refrigerator. Refrigerate cupcakes until chilled. (I didn't refrigerate them)
- Using a 1-inch round biscuit cutter, cut a small hole in the center of each cupcake, pushing cutter down about 2/3 of the way and using a twisting motion to release cake; reserve scraps. Fill hole with pudding and cover with scraps to enclose. (I used a small icing-tip to fill them up)

Instructions for Chocolate Pudding:
- Place cocoa powder, cornstarch, sugar, salt, heavy cream, egg yolks, milk, and chocolate in a medium saucepan over medium-high heat.
- Cook, stirring, until mixture comes to a boil and begins to thicken, about 5 minutes.
- Remove from heat and strain mixture through a fine mesh strainer set over a medium bowl; discard solids. (really unnecessary)
- Immediately stir in butter and vanilla until well combined.
- Place plastic wrap directly on surface of pudding to prevent a skin from forming.
- Transfer pudding to a refrigerator until chilled, about 4 hours. (I did 2 hours)

Nutella Frosting recipe: found it on the web, can't remember the website.

Instructions:
- Place the confectioners' sugar, Nutella, butter, vanilla, and salt in the bowl of an electric mixer fitted with a paddle attachment.
- Mix on medium-low speed until creamy, scraping down the bowl with a rubber spatula as you work.
- Add the cream and beat on high speed until the mixture is light and smooth.

The chocolate pudding boiling away. 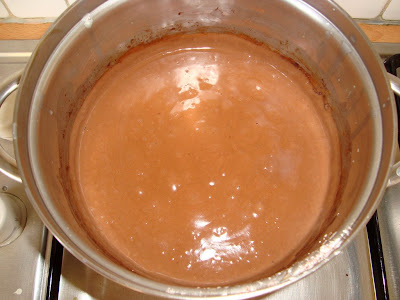 The cuppies baking in the oven. They looked so beautiful then... 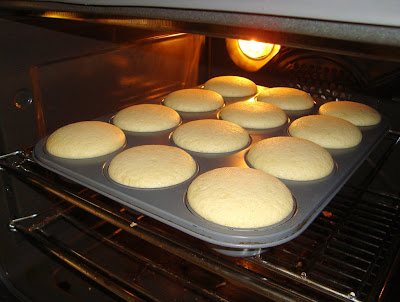 But they began sinking when I took them out of the oven. (it got worse after a few minutes) 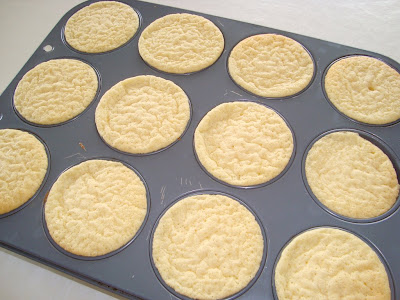 Demonstrating on the only cupcake that didn't sink. 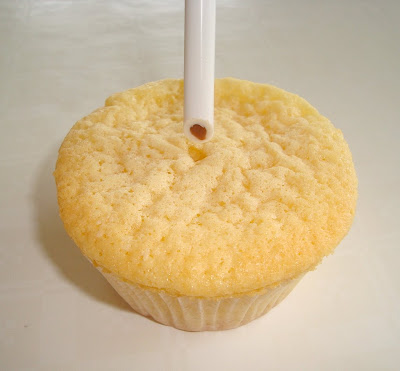 Filling them with chocolate pudding. 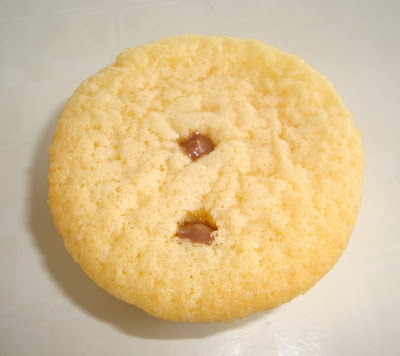 The Nutella Frosting was dangerously delicious! Without a doubt the best frosting I have made to date. Though it should have a warning sign: Don't pay attention to your waistline when eating. 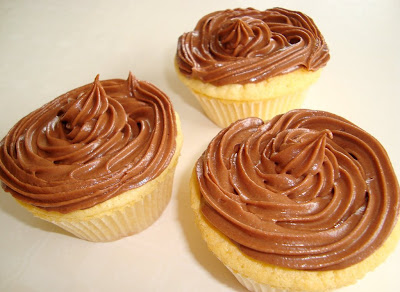 Cut down the middle and voila! The chocolate pudding! 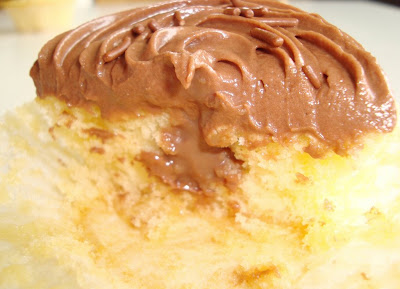