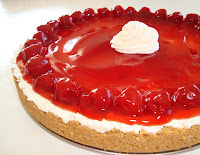 Since this is my first cheesecake I have ever made, I wanted to start with one that was really easy and allowed no room for mistakes. A couple of weeks ago I watched 'Nigella's Express' on tv (something I do every Thursday) and she presented an unbaked cheesecake and mentioned that a baked cheesecake "needs as much attention as a new born baby". I found the recipe online and compared it to several other non-baking cheesecake recipes that got really good reviews. I added 1/4 cup white sugar to the crust, but other than that it's exactly Nigella's recipe. I used a 9-inch springform pan instead of the recommended 8-inch. I do have a 8-inch pan, but it's sooo old and rusty I'd rather not use it. So I made more crust (1.5 x) than it says on the recipe (also I like a thicker crust), and I made less cream cheese filling because I had a 226g tub instead of a 300g tub. Now the review: definitely 5 out of 5!!! The taste is amazing and I normally don't even like cheesecakes that much. It tastes very fresh yet it's very rich, as one expects from a cheesecake. Sometimes the easiest things are the most delicious and this definitely goes for this cheesecake. I'm so excited to post about this that I haven't even cleaned up the dishes. I also posted the video of Nigella's Cherry Cheesecake.

Instructions:
- Blitz the biscuits in a food processor (I don't own food processor, so I used a blender which worked really well) until beginning to turn to crumbs, then add the butter (and sugar) and whiz again to make the mixture clump.
- Press this mixture into a 8-inch (20cm) springform tin; press a little up the sides to form a slight ridge.
- Beat together the cream cheese, icing sugar, vanilla extract and lemon juice in a bowl until smooth.
- Lightly whip the double cream, and then fold it into the cream cheese mixture.
- Spoon the cheesecake filling on top of the biscuit base and smooth with a spatula. Put it in the fridge for 3 hours or overnight.
- When you are ready to serve the cheesecake, unmould it and spread the black cherry over the top.


Working with a blender instead of a food processor to crumble the crackers works just as well. 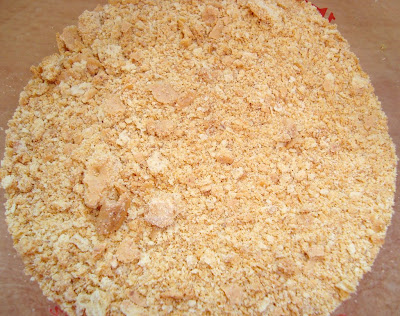 The crust pressed down in a springform pan. 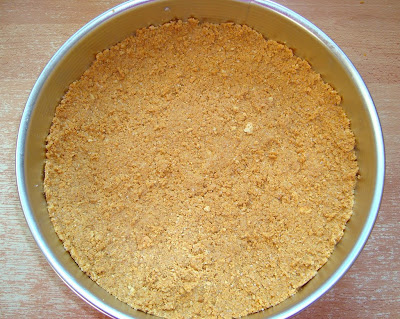 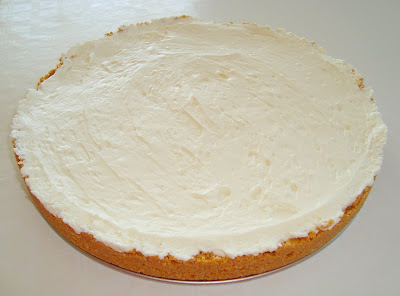 Topped with cherry pie filling (I hope Nigella isn't reading this, she hates pie filling) and some whipped cream. 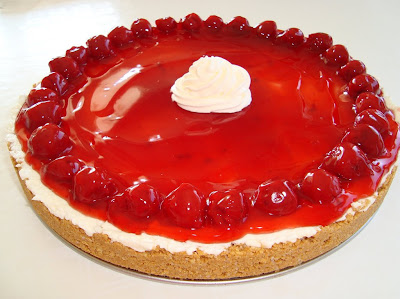 Out of fear of breaking the cheesecake, I just left it on the pan and began slicing it. One of the best the best cheesecake I have ever eaten!!! 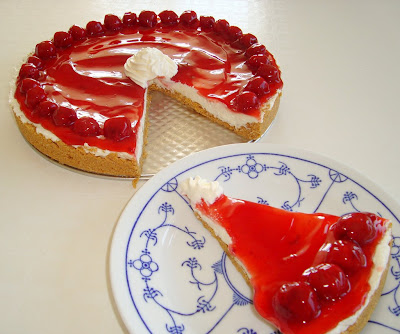 Eliana said…
This looks so quick and easy that I must try it - especially since cheesecake is one of my favorite desserts. I also love Nigella. Thanks for posting this great recipe.
March 31, 2009 at 5:30 PM

How To Eat A Cupcake said…
I could eat an entire can of cherry pie filling! Your cheesecake certainly looks delish, but I definitely prefer the baked version. ;D
April 1, 2009 at 12:35 AM