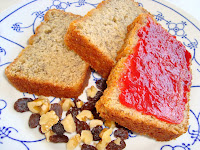 Hey everyone! I hope you had a nice St. Patricks Day! Living in Europe, we don't really celebrate St. Patricks Day, but I did bake yesterday. I wasn't planning on it, but I had 4 bananas wasting away and so I decided to use them instead of throwing them in the garbage can. I made Banana Bread, which is something I've never tasted. My mother said she had baked it before and that it's really good. Once, I made Banana Crumb Muffins, but they were so disgusting, I threw them away immediately. I searched for a couple of Banana Bread recipes that looked good, and I settled for this one by Nigella Lawson. Hers was the only recipe that used a number of bananas, in stead of a certain amount of cups bananas (I think this is where it went wrong with the Banana Crumb Muffins). It's a really easy, basic recipe that anyone can make and it's very very tasteful.

Banana Bread recipe: Nigella Lawson - How To Be A Domestic Goddess

Instructions:
- Put the golden raisins and rum or bourbon in a small saucepan and bring to the boil. If you're thinking about giving this cake to children, don't worry, the alcohol doesn't pervade: you just end up with stickily, aromatically swollen fruit.
- Remove from the heat, cover and leave for an hour or until the golden raisins have absorbed most of the liquid, then drain.
- Preheat the oven to 325F/170C.
- Put the flour, baking powder, baking soda and salt in a medium-sized bowl and, using your hands or a wooden spoon, combine well.
- In a large bowl, mix the melted butter and sugar (& brown sugar, if you're using it) and beat until blended.
- Beat in the eggs, one at a time and then the mashed bananas.
- Then, with your wooden spoon, stir in the walnuts, drained raisins and vanilla extract.
- Add the flour mixture, a third at a time, stirring well after each bit.
- Scrape into a loaf pan and bake in the middle of the oven for 1 - 1 1/4 hours. (after 45 minutes of baking, I topped the bread with silver foil, so that the top wouldn't get too brown) (my bread was ready after 60 minutes)
- When it's ready, an inserted toothpick or fine skewer should come out clean.

The banana bread batter is sooo good! Taste more like a banana cake batter if you ask me. 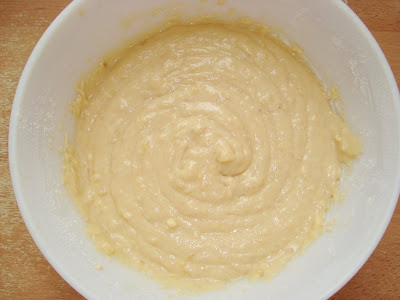 How it went into the oven. 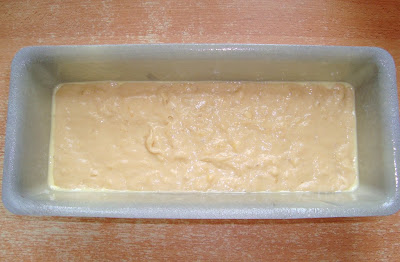 Baking in the oven. 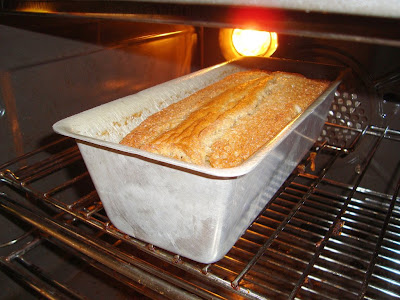 It has such a lovely, yet light banana aroma. 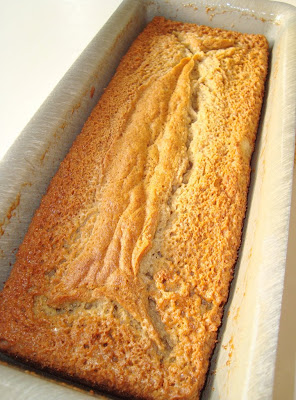 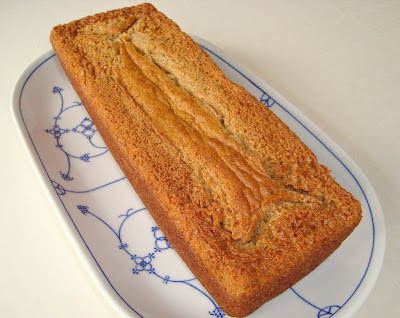 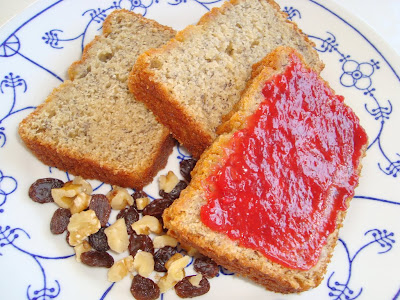 Anonymous said…
I do not like bananas much, but enjoy cooking especially food cake. Meetings not very good that this will taste like
I will write again on his blog about this subject when completed
Thanks
March 18, 2009 at 8:07 PM

How To Eat A Cupcake said…
I love all things banana! This looks great. And the batter looks delicious too!